‘A gift to the future’

A rousing debut for ‘groundbreaking’ facility 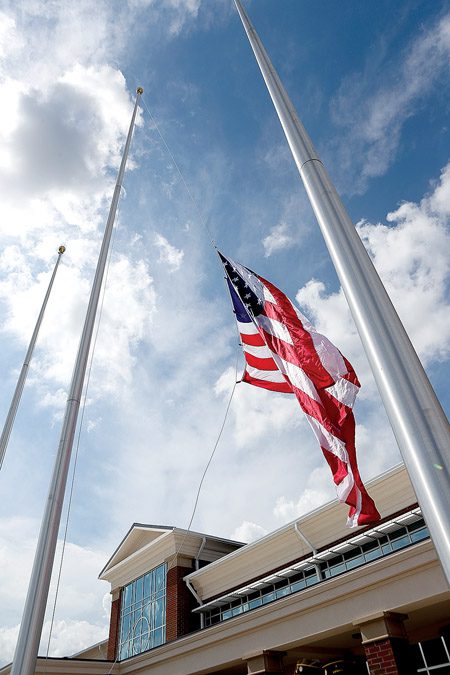 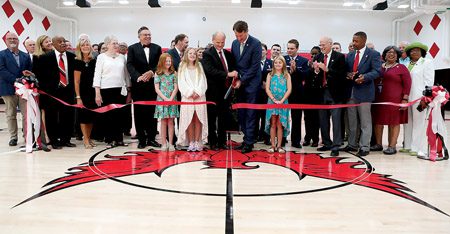 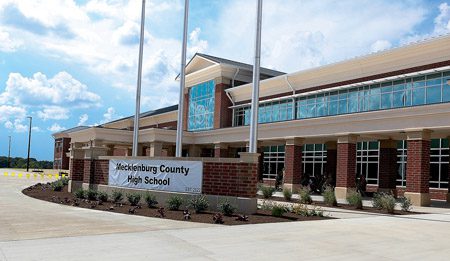 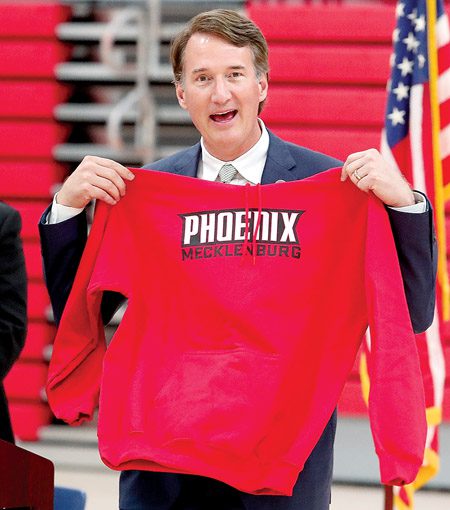 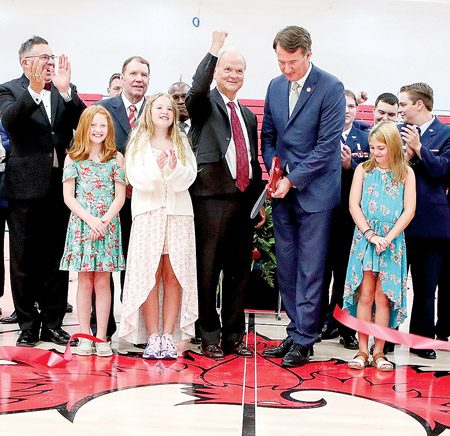 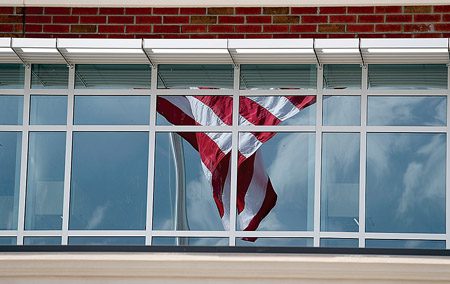 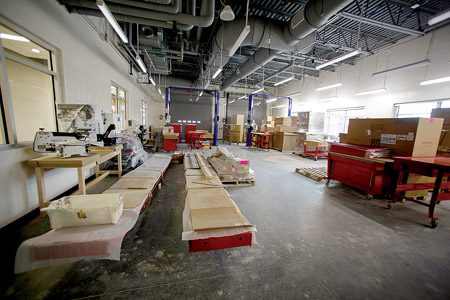 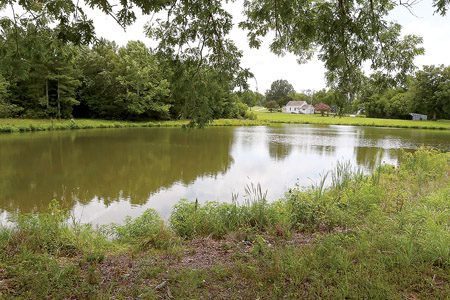 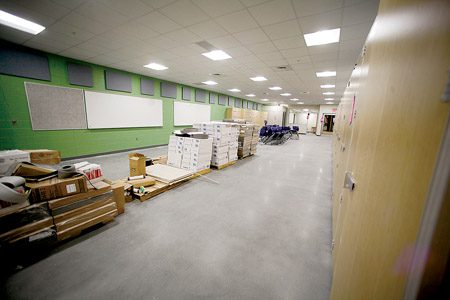 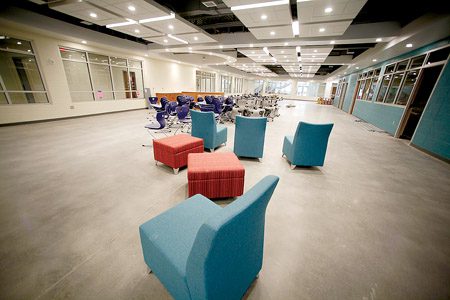 “We are here to honor what this county has accomplished, a new school that was years in the making.”

The ribbon cutting ceremony began with a ceremonial raising of the American flag by members of VFW Roanoke River Post 8163 in Clarksville as the U.S. Army Band under the direction of former Park View band director Jim Bradshaw played the National Anthem.

Barbour said entering the new school brought him back to the day, more than five years ago, when supervisors and School Board members walked the halls of the former Bluestone and Park View high school and middle school buildings. They were the same halls walked by students in 1967, the year Barbour graduated from Park View High School, and in 1955, the year those schools first opened.

“Today we have the finest education facility anywhere,” Barbour proclaimed.

School Board Chair Gavin Honeycutt focused his remarks on the seven years it took to design and build “this impressive facility,” which he also called “state of the art and a groundbreaking school.”

He credited South Hill-area businesswoman Jean Clary Bagley with instilling in him the importance of education and how, as a citizen of Mecklenburg County, it is his duty to lift up the next generation. Honeycutt recounted how many years ago, Bagley adopted a class of kindergartners, supported them through their 13 years of schooling and paid for the graduates of the class to earn an associates degree.

Honeycutt said her belief in those students offered them a chance for a better future, just as the new learning environment at MCHS-MCMS will offer today’s students a brighter and more expansive future.

5th District Congressman Bob Good called the new school “a model for Virginia innovation” and an inspiration for how it has brought former rivals — Bluestone on the west and Park View on the east — together. Dale Sturdifen, a former member of the Mecklenburg County School Board and now field director for Rep. Good, recalled the day when he, as school board chair, signed the contracts and financing agreements to start the process of building the new $152 million complex.

Before cutting the ribbon to officially open Mecklenburg County High School and Mecklenburg County Middle School, Superintendent of Schools Paul Nichols spoke about how the facility will enhance the workforce-focused curriculum of Mecklenburg County Public Schools. “It is exciting to have a new building, but what goes on inside is more important,” Nichols said.

Nichols recalled an earlier visit to the school and other education centers in Mecklenburg County by Virginia Secretary of Education Aimee Rogstad Guidera, who Nichols said “was captivated by our vision.” That understanding fueled Virginia DOE’s decision to designate Mecklenburg County High School-Middle School as one of the first lab schools in the state.

A lab school is a special designation granted by the VDOE to public school divisions that partner with colleges and universities, community colleges and select nonprofit private universities to focus on career and technical education or other specialty education areas like STEM education, computer science and the arts. Lab schools are similar to charter schools but are focused on developing and testing education models and studying how they affect student learning. They also provide more learning options for students and parents.

Virginia has $100 million set aside in the current state budget to help create and sustain lab schools. Once Mecklenburg County achieves this designation, it will be in a position to apply for funding from this pool.

Youngkin, who joined Nichols for the ceremonial ribbon cutting, called the new school complex a “gift to the future” and said the county had better ready itself for the endless stream of visitors who will be coming to see the innovative school facility. “There is no more of a compliment, because what you are building here [with the school and curriculum] will draw people from all over.”

“These schools demonstrate how a community can come together not only to build a state-of-the-art facility but to invest in their children and transform their workforce,” said Youngkin.

He then stepped away from the microphone to sign into law three bills — HB 563, sponsored by Deputy Majority Leader Israel O’Quinn, R-Washington, and SB 471 and 473 sponsored by state Sen. Jennifer McClellan, D-Richmond — that support more than $1.2 billion in funding for school construction in Virginia.

Youngkin noted that Mecklenburg County is in a good position to tap into these funding sources for planned upgrades to the three aging elementary schools. “We look forward to being back here” for their dedication, Youngkin said.

The governor thanked Nichols and the other county leaders and praised their commitment in bringing the project to fruition. “The most important thing is to invest in our children’s future. Their future will be our future.”

Following the ribbon cutting, school staff members led guests on a tour of the 354,568 square foot facility, which is designed to accommodate up to 2,800 students — 1,300 in middle school and 1,500 in high school.

Students will be allowed to tour the school on a rotating basis starting Sept. 6. The general public will be invited to visit before the start of the school year on Sept. 12.

Superintendent of Schools Paul Nichols on Monday thanked members of the Board of Supervisors for their support of the new MCHS/MCMS complex and their participation in the ribbon cutting which took place on Friday.

“Substantial completion has happened and we are moving into the new school,” Nichols told supervisors at their monthly meeting on Monday. Nichols said he expects the building will receive its certificate of occupancy by the end of the week, although some finishing touches will continue on the building. The work “will not interfere with instruction” once school starts on Sept. 12, Nichols said.

He also commented on the American flag that now flies atop the 80-foot flagpole outside the new school complex. At 25 by 15 feet, it is likely the “largest in the county,” Nichols said. The flag was donated by Cleveland Construction, the general contractor on the school building project.

Friday’s event was “more than simply a flag raising. The other components were exciting,” Nichols said. He explained that when Gov. Glenn Youngkin was first invited to attend the ribbon cutting, it was decided that he would use the visit to discuss career academies and workforce development and what goes on inside the school. “We need to have our students focusing on jobs and careers, not just passing SOL tests. That process has been building as has the school.”

Nichols shared his view that the Governor’s focus on career literacy and lab schools is aligned with Mecklenburg County’s curriculum and the school division’s awareness of how communities can deliver on the needs of the area.

“There was a roundtable discussion about moving forward. We will probably be one of the first lab schools identified. It is different than a charter school. Our kids are seamlessly prepared for graduating with credentials to transitioning into college or the workforce,” Nichols said.

On a final note, Nichols invited supervisors to attend the annual convocation set for Aug. 29. His hope is to hold the event in the new MCHS/MCMS 1,200-seat auditorium.

Tours for students in grades six and 12 will take place Sept. 6. Seventh grade students and 11th graders can tour the school on Sept. 7. Tours for tenth grade sophomores and eighth graders will take place on Sept. 8, and ninth grade freshmen are invited on Sept. 9. All tours will run from 5-7 p.m. Parents can accompany their student on the tours on the appropriate day.

Supervisor David Brankley asked if the construction delays might result in cost savings to the county. Nichols replied that the general contractor had no control over many of the delays, which were caused by supply chain disruptions. “There will be discussion with the contractors and the architects on that issue.”

Supervisors Charles Jones asked when MCHS will hold its first home football game. Nichols replied, “Sept. 2 and it will be on the new field.”

In response to a question from Barbour on the student population, Nichols said the school was built to accommodate 1,500 high school students and 1,300 middle school students. Currently there are fewer than 2,400 students between the two secondary schools.