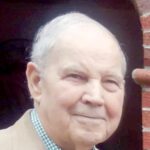 Charles Ray “Jimmie” DeJarnette, age 93, of Red Oak, died Tuesday, April 19, 2022. He was born in Clover April 15, 1929 and was the son of the late Richard Pearson DeJarnette and the late Ruth Adams DeJarnette.

Jimmie was a United States Army Korean War veteran. He was a long time member of Public Fork Christian Church and a charter member of Bacon District Volunteer Fire Department. He was a project engineer for the Virginia Department of Transportation (VDOT) until his retirement in 1991. He was also a tobacco farmer, ran a plant nursery and enjoyed gardening and woodworking. Jimmie loved traveling all over the country in his RV and had been to every state except Hawaii.

In addition to his parents, he was preceded in death by his brother, Rogers DeJarnette.

Online condolences may be expressed at www.newcomballgoodfh.com.

Newcomb Allgood Funeral Home will be handling the arrangements.