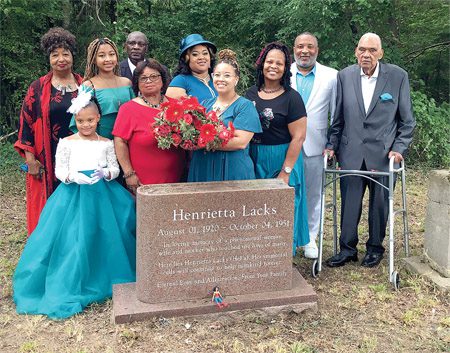 The family of Henrietta Lacks reunited for a celebration of her extraordinary legacy Sunday at St. Matthew Baptist Church in Clover.

In honor of what would have been Henrietta’s 102nd birthday weekend, family members gathered at her gravesite near Lacks Town Road before attending a church service in her memory.

At least half a dozen family members, including Lawrence Lacks, Henrietta’s only living child, traveled to Halifax County to participate in the church service. Today, family members will gather in South Boston with local organizers to launch the fund raising campaign for the Henrietta Lacks statue at Constitution Square in downtown South Boston.

On Sunday morning, members of St. Matthew Baptist Church joined Henrietta’s descendants at the gravesite next to the home where she grew up. The sharecropping family’s log cabin has been overtaken by brush and trees, but nearby lies her headstone, which was donated by admirers and dedicated in 2010. Henrietta Lacks’s remains were brought back to Clover after she died of cervical cancer in 1951 in Baltimore, Md.

Lacks’ family members spoke of Henrietta’s impact on modern medicine — her self-replicating HeLa cells have unlocked numerous feats of scientific progress — and Halifax County’s significance to Henrietta and to the family.

The Lacks family and St. Matthew’s Baptist Church congregation come together to celebrate the life and legacy of Henrietta Lacks.

Victoria Baptiste, one of Lacks’ great-granddaughters, began the gravesite ceremony by noting, “A lot of us didn’t even get a chance to get a real relationship with [Henrietta], so coming here back on the land where she was reared and where we have so much family legacy still alive and healthy is very monumental for us.”

The ceremony concluded with a few family members singing a verse of “Precious Lord,” a hymn that Lacks enjoyed.

Following the gravesite visit, everyone joined at the church for the memorial service. As a tribute, the front of the church was adorned with teal decorations in honor of Lacks’ battle with cervical cancer. Many of her family members wore teal as well.

Alfred Lacks-Carter, Lacks’ grandson, said, “It means a great deal to see everybody coming out and supporting the family because Henrietta is such an instrumental person in the medical field, and she was beloved by all her friends and family. After all these years, to see the support for the family is a blessing.”

During the service, several members of the Lacks family offered remarks on the unique nature of Henrietta’s cells, describing her undying cell line — a medical marvel that was unprecedented at the time — as God’s blessing. At one point, Baptiste and Veronica Robinson, another great-granddaughter of Lacks, read verses from the Old and New Testament.

Barbara Coleman Brown, president of the Halifax County South Boston NAACP Chapter and co-chair of the Henrietta Lacks Hometown Initiative, thanked everyone who has contributed to the effort to erect a statue to Henrietta in her home community, as well as explain its purpose and importance to Halifax County.

The Henrietta Lacks Hometown Initiative was created by the Halifax County-South Boston NAACP Chapter in conjunction with the Henrietta Lacks House of Hope, the family’s non-profit foundation (www.hela100.org). Money collected during the church service went towards the initiative.

Referring to his sermon as “a message of hope,” Rev. Alfred Chandler summarized how to keep Lacks’ legacy alive — through the 3 R’s: Remembrance, Recognition and Respect.

Lacks-Carter said, “I think that [Henrietta] would be proud to know that she’s touching countless lives all over the world with the HeLa cells, just to know that so many medical advancements have come from her body.”

As a precaution against COVID-19, everyone who attended the service was required to wear a mask while indoors.

For more information on the initiative and how to donate, visit hela100.org.