A Tuesday night confrontation between neighbors at the Plank Road Apartment Complex in South Hill left one man with gunshot wounds and another on the run. 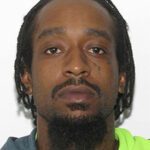 Johnson, 34, is described as a 5’11” tall, African American man weighing 160 pounds. He has two teardrops tattooed on the left side of his face near his nose and dental jewelry on his front teeth. He was last seen wearing a grey shirt, black jogging pants, sneakers and a stocking cap. At least one of his hands may have handcuffs attached.

On Thursday, Roberts posted the following update on social media: “We are still searching for Johnson with the assistance of South Hill PD, Virginia State Police, Mecklenburg Sheriff’s Office, Dinwiddie Sheriff’s Office and the Alberta Police. Further investigation has revealed that the suspect had his cellphone with him and may have called someone to pick him up. We will continue the search until we exhaust all resources. Deputies will be assigned to stay in this area all night. “

According to police, Johnson was arrested for shooting a neighbor at the Groom School Apartment Complex in the 1000 block of Plank Road. The altercation began early Tuesday evening when Johnson allegedly heard someone banging on the door of his apartment. Law enforcement sources believe Johnson responded by shooting the unnamed person in the back.

South Hill Police, responding to a complaint about shots being fired, found the victim of the shooting lying in a ditch near the Plank Road Apartments. Assuming he was intoxicated, they did not transport him to the hospital or check him for injuries. The following day the victim went to the emergency room complaining of back pains and doctors at that time discovered he had been shot.

After investigating the incident, South Hill Police Officer C.B. Fleming was dispatched to arrest Johnson as the alleged shooter. Authorities involved in the manhunt say Fleming loosely cuffed Johnson and placed him in the back of the patrol car for transport to Meherrin River Regional Jail in Alberta.

While en route, Johnson is said to have complained to Fleming that he was feeling ill and needing to vomit. At that point Fleming lowered the window in the rear of his patrol car. As Fleming approached the sally port at the jail in Alberta, Johnson reached outside the patrol car, opened the door and ran away into the woods near the jail.

Police believe he was able to remove at least one of his hands from the handcuffs while being transported. They also say he had a cellphone on him at the time and may have called for help from a friend.

A man believed to be Johnson was spotted early on in the manhunt by Deputy Don Blanton, one of the canine handlers with the Mecklenburg County Sheriff’s Office, but he eluded capture.

The search for him continues.