Police, HCHS team up to bring back safe driving day with students headed off for spring break 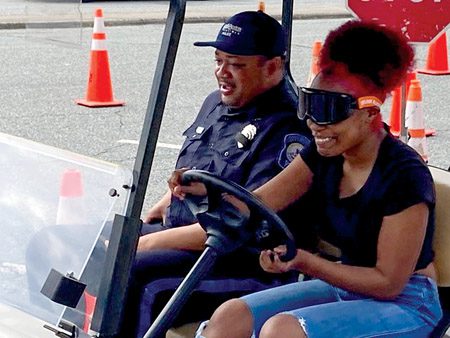 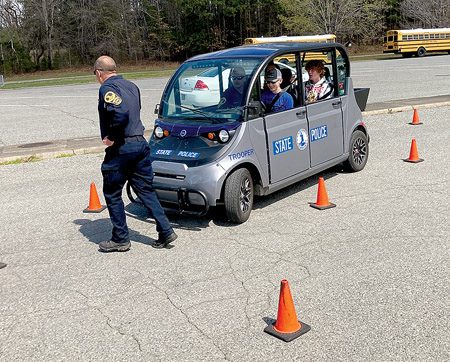 Virginia State Trooper David Pendergrass makes like a deer and jumps in front of a cart driven by a HCHS student. Top, goggles-wearing Sania Buster tries to keep her cart on the straight and narrow with School Resource Officer Ed Cawthon riding at her side.

Before taking off for spring break, some 400 students at Halifax County High School got a chance to learn about driver safety with police officers rather than learn the hard way by encountering them on the road.

Virginia State Police, the South Boston Police Department, Halifax County Sheriff’s Office and Halifax Town Police set up safe driving simulation challenges at the HCHS bus parking lot on Friday, giving students insights on what can happen when motorists get distracted behind the wheel or drive impaired. It was the first time in six years that law enforcement agencies and the high school have teamed up to hold the safe driving day.

“Since covid restrictions have mostly all been lifted, we thought it would be a good time, especially with spring break being next week,” said Halifax State Trooper David Clark, who helped coordinate the event. “We hope to be a main contact for educating kids and promoting highway safety. It’s not all about bad interactions with law enforcement, as you might say about getting a ticket or getting stopped for speeding.

“This is a good interaction, where kids can be educated and see first-hand how distractions can impair their ability to drive.”

Virginia State Police, through its school YOVASO program (Youth of Virginia Speak Out About Traffic Safety), travels around the state with its distracted driving simulator and “ScanEd: Physics of a Crash” program, which illustrates for young drivers the real-life consequences of traffic crashes. At the high school, ScanEd took the form of a crumpled vehicle dotted with QR codes, by which students could call up videos of crash scenes on iPads. The wrecked car was hauled in at no cost by Wayne Carr of Carr’s Enterprises in Halifax.

Virginia State Police also set up a distracted driving simulator — basically, a course marked off with traffic cones in the bus parking lot. Students were invited to drive a State Police cart through the course with a Trooper sitting next to them and with friends riding in the backseat. All of the passengers were given a simple assignment: try to distract the drivers and cause them to make mistakes.

Trooper Mike Snodgrass of the Blackstone office rode next to the student drivers as Clark and a third trooper, David Pendergrass of Blackstone, lurked around the course, looking to create distractions. As one driver took the wheel, Snodgrass called out an urgent message: “Cookout is about the close!” Asking the backseat passengers what they wanted at the fast-food drive-thru, Snodgrass barked their orders: “Chicken nuggets and hot dogs!”

A student takes her turn behind the wheel with Trooper Mike Snodgrass ready to point out her mistakes and HCHS teacher Jimmy Popek recording her every move.

With rock music blaring from their cell phones, the backseat passengers made a game effort to draw the attention of their friend behind the wheel. The young driver made a full stop at a stop sign planted midway through the course — avoiding a mistake committed by several others. But as he backed up, the cart rolled into Snodgrass, who had snuck up behind. The “accident” drew chuckles from the back seat.

“Every cone they hit, that’s like a dog that ran out in the road while you were fiddling with the radio. Or maybe that’s a mailbox that you hit,” said Kendall Lythgoe, Virginia State Police coordinator of the YOVASO program who was in for the day from Richmond.

“The kids really like it when you say, ‘That’s grandma you just sideswiped,’ or you got T-boned when you ran that stop sign,” said Lythgoe.

Although the driving mistakes are taken in the spirit of fun, the message is a serious one, she said.

“Kids tell us they really love the program, and they really like being with the Troopers and building relationships — they’re not the big bad Troopers that they are on the road,” she said.

Although fatal crashes involving youths tend to garner intense public attention, statistically, such tragedies are on the decline. Since YOVASO was formed in 2001 and went statewide in 2007, “we’ve seen a decline in teen traffic fatalities,” said Lythgoe. “We obviously don’t attribute that directly to our program. We attribute that hopefully a little bit to us, but also to new laws that have been in place” since 2007.

“The kids have shown a lot of interest,” added Clark. “They’ve taken it very seriously. It’s enjoyable for them and I think they’ve actually learned a lot.”

Over in a different part of the bus parking lot, officers with the SBPD, Sheriff’s Office and Halifax Town Police set up a second simulation course — this one emulating the effects of driving drunk. For this exercise, students donned goggles that blurred their vision — a rough approximation of what it’s like after downing too many drinks.

Students steered the cart with School Resource Officer Ed Cauthon of the South Boston Police Department riding at their side. One young driver, sophomore Sania Buster, had a hard time with the course. She rolled over several of the large orange traffic cones, to the amusement of classmates.

Giggling after her turn behind the wheel, Buster said she learned her lesson: “Don’t drink and drive!” she laughed.

Reagan Cannon, who teaches driver’s education at HCHS, applauded the exercise and said the school is working to reestablish its YOVASO club after the program went dormant a few years ago. Cannon also said HCHS will host a follow-up program before the junior-senior prom to highlight the dangers of driving under the influence and unsafe driving in general.

The idea for the pre-prom program is to bring in speakers who can impress upon students the personal tragedies that result from unsafe driving. Cannon said she also hopes to simulate a crash scene, complete with a med-flight helicopter, to demonstrate for students what can go wrong behind the wheel.

“I’m super passionate about driving education and making sure students have all the knowledge and tools we can provide for them to be safe out there,” said Cannon. “Hopefully by seeing that, if we can reach one student, we feel that we’ll be successful.”