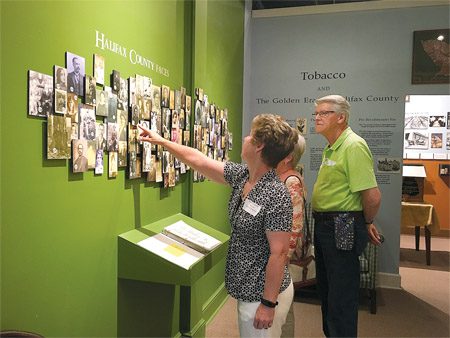 Serpia-toned photos of Halifax County’s storied past awaited guests at the 40th anniversary celebration of the South Boston-Halifax County Museum of Fine Arts and History on Sunday afternoon.

The event, from 2-4 p.m., was open to the public with light refreshments. The fare included desserts such as lemon cookies and cinnamon cupcake-esque drops that were made from recipes lifted from historical South Boston cookbooks.

The anniversary event was informal and program-free — there were no speeches — and people were free to tour the Wilborn Avenue museum at their own leisure. However, members of the museum’s board of directors were available to answer questions throughout the event.

Since it first opened in 1982, the museum has connected citizens of all ages to the history and culture of Halifax County and South Boston.

The anniversary celebration shined a spotlight on its three newest exhibits: The Crossing of The Dan, South Boston in the 1800s and The World of Charlotte’s Web.

The entrance of the museum flows into The Crossing of The Dan exhibit, which was housed at The Prizery until it was relocated to the museum in 2020. The mannequin display tells the story of Gen. Nathanael Greene and his army crossing the Dan River on Feb. 14, 1781 ahead of pursuing British forces, a chapter of Revolutionary War history that is celebrated annually in South Boston.

George Washington played a prominent part in Sunday’s museum commemoration. In a game inspired by “Where’s Waldo,” guests were shown a picture of America’s first president at the front desk and challenged to find the matching copy elsewhere in the museum. People could be seen peeking around the building, hoping to be among those who could answer the question, “Where’s George?”

The South Boston in the 1800s exhibit depicted how the town has evolved throughout history. Artifacts such as antique furniture and black-and-white photo collages and news clippings, sometimes categorized as “Village to Town,” offered insights as to how South Boston came to be.

One of the more intricate displays is a timeline of South Boston’s progression through various eras, accentuated with model stage coaches and railroads and other period pieces. The timeline depicts the history of Halifax County from the 1600s to today, giving visitors plenty to discuss in casual conversations about the area’s past.

Permanent exhibits at the museum include the American Indian Gallery, featuring photos and prehistoric tools, the Military History of Halifax County, and the Tobacco Exhibit, which looks back at the history of the National Tobacco Festivals in South Boston from 1935 to 1941.

According to museum director Pam Smith, the newest attraction, the World of Charlotte’s Web, is an offshoot of an exhibit that the museum hosted last year on the Booming 1950s. “[Charlotte’s Web] was originally supposed to go with a display we had last summer because it was about the 1950s, and that’s when the book was published. But that didn’t end up happening,” said Smith.

Although mostly intended for children, the Charlotte Web’s exhibit proved to be an attention-getter among the adults who turned out by the dozens for Sunday’s anniversary event.

What began as a small library display four decades ago has evolved into a place for local citizens and visitors to share their knowledge and interest of the history and culture of Halifax County and South Boston in an open, welcoming environment.

Admission to the museum is free, although donations are welcome. The South Boston-Halifax County Museum of Fine Arts and History is open Wednesday-Saturday from 10 a.m.-4 p.m., and group tours of 10 or more are available on Tuesdays with museum approval.